The complex current and voltage waveforms associated with many of today’s AC power applications pose specific measurement problems.
A good starting point for tackling some of these problems is an understanding of the basic measurements and terms used, and the relationships between them.

The RMS value is the most commonly used and useful means of specifying the value of both AC voltage and current. The RMS value of an AC waveform indicates the level of power that is available from that waveform, this being one of the most important attributes of any AC source.

The calculation of an RMS value can best be described by considering an AC current waveform and its associated heating affect such as that shown in fig.1(a) below: 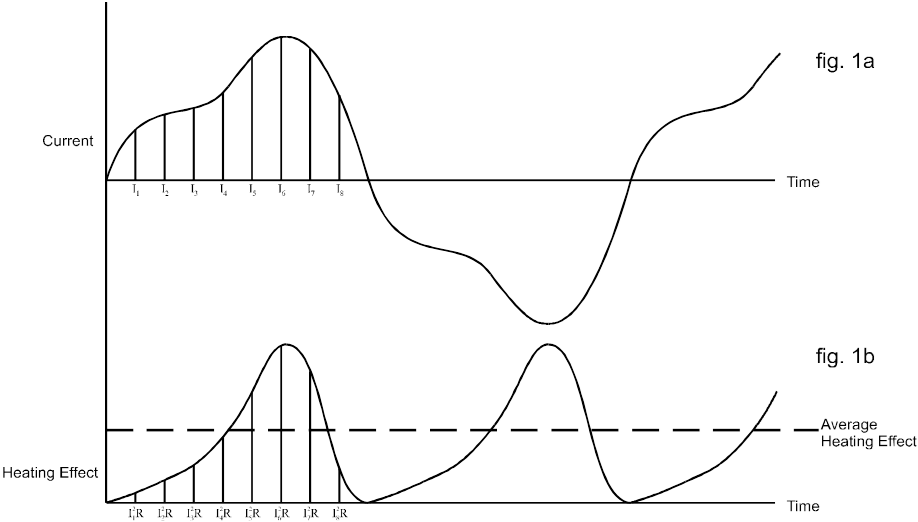 If this current is considered to be flowing through a resistance the heating effect at any instant is given by the equation:

By dividing the current cycle into equally spaced coordinates the variation of the heating effect with time can be determined as shown in fig. 1b.

The average heating effect (power) is given by:

If we wanted to find the equivalent value of current that would produce the average heating effect value shown above then the following applies:

= the RMS value of the current.

This value is often termed the effective value of the AC waveform as it is equivalent to the direct current that produces the same heating effect (power) in the resistive load.
It is worth noting that for a pure sinusoidal waveform that ; RMS value = peak value / SQRT(2) = peak value * 0.707

The average value of a waveform such as that shown in fig. 2 is given by:

It is clear the average value can only have real meaning over one half cycle of the waveform as for a symmetrical waveform the mean or average value over a complete cycle is zero.
Most simple multimeters determine AC values by full wave rectification of the AC waveform followed by a calculation of the mean value.
Such meters however will be calibrated in RMS and will make use of the known relationship between RMS and average for a sinusoidal waveform
i.e.: RMS = 1.11 x mean.

However for waveforms other than a pure sine wave the readings from such meters will be invalid.

If a sinusoidal voltage source of say 100 V RMS is connected to a resistive load of say 100 Ohms, then the voltage and current can be depicted as in fig. 3a. and are said to be in phase.
The power that flows from the supply to the load at any instant is given by the value of the product of the voltage and the current at that instant , as illustrated in fig. 3b.
From this it can be seen that the power flowing into the load fluctuates (at twice the supply frequency) between 0 and 200 Watts and that the average power delivered to the load equals 100 Watts – which is what one might expect  from 100 V RMS and a resistance of 100 Ohms. 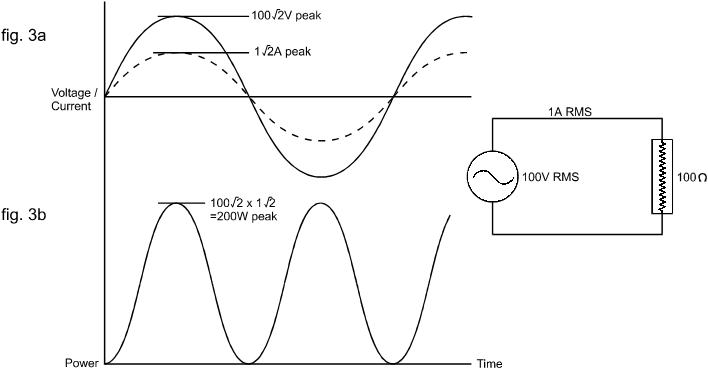 However if the load is reactive (i.e. containing inductance or capacitance as well as resistance) with an impedance of 100ohms, then the current that flows will still be 1A RMS but will no longer be in phase with the voltage. This is shown in fig. 4a. for an inductive load with the current lagging by 60o.

The average net flow into the load therefore , is much smaller than in the case of a resistive load, with only 50W of useful powering delivered into the inductive load.

In both of the above cases the RMS voltage was equal to 100V RMS and the current was 1A RMS .
The product of these two values is the apparent power delivered into the load and is measured in VA as follows:
Apparent Power = Volts RMS x Amps RMS

The real power delivered has been shown to depend on the nature of the load.
It is not possible to determine the value of real power from the knowledge of RMS voltage and current .
This can only be achieved (e.g. for assessing heat loss or efficiency) through the use of a true AC power meter capable of computing the product of the instantaneous voltage and current values and displaying the mean of the result.

It is clear that, in comparison with DC systems, the transferred AC power is not  simply the product of the voltage and current values.
A further element known as the power factor must also be taken into consideration.
In the previous example (real and apparent power) with an inductive load, the  power factor is 0.5 because the useful power is exactly one half of the apparent power.
We can therefore define power factor as:

It is for this reason that power factor is often referred to as cosθ.
It is, however, important to remember that this is only the case when both voltage and current are sinusoidal (Figure 5, I1 and I2 ) and that power factor is not equal to cosθ in any other case [Figure 5 (I3)].

This must be remembered when using a power factor meter that reads cosθ, as the reading will not be valid except for pure sinusoidal voltage and current waveforms.
A true power factor meter will compute the ratio of real to apparent power as described above.

It has already been shown that for a sinusoidal waveform:

The relationship between peak and RMS is known as the Crest Factor and is defined as:

Thus for a sinusoid:

Many items of modern equipment connected to the AC supply take non-sinusoidal current wave forms, these include, power supplies, lamp dimmers and even fluorescent lamps. 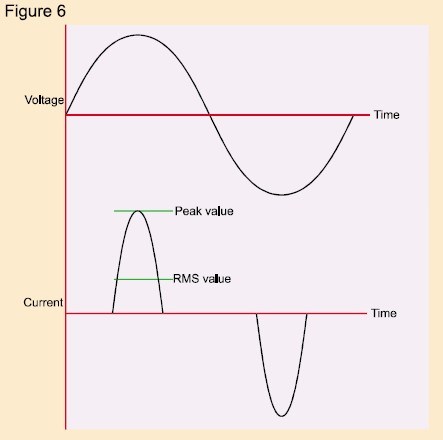 A typical switch mode power supply will take current from the AC supply as shown in fig. 6.
It is clear that the crest factor of the current waveform depicted is much greater than 1.414 – indeed most switch mode power supplies and motor speed controllers have a current crest factor of 3 or greater.
It follows therefore that a large current crest factor must put additional stress on equipment supplying such load as the equipment must be capable of supplying the large peak currents associated with the distorted waveform.
This is particularly relevant were a limited impedance power source, such as a standby inverter, is supplying the load.
It is thus clear that, where AC equipment is involved it is important to know the crest factor of the current drawn as well as its RMS current.

It can be shown by Fourier analysis that a non-sinusoidal current waveform consists of a fundamental component at the supply frequency plus a series of harmonics  (i.e. components at frequencies that are integral multiples of the supply frequency).
For example a 100 Hz square wave consists of the components shown in fig. 7.
A square wave is clearly very distorted compared to a pure sine wave. However the current waveform drawn by for example a SMPS, a lamp dimmer or even a speed controlled washing machine motor can contain harmonics of even greater significance.
Fig 8. Shows the current drawn by a popular SMPS model together with the harmonic content of that current. 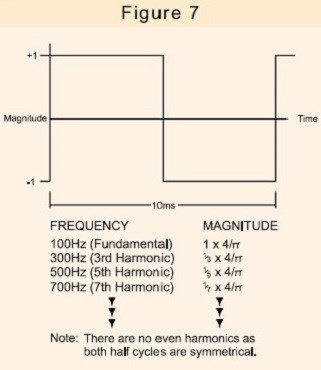 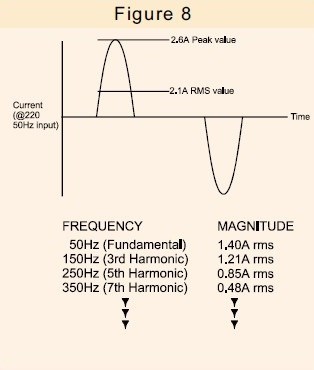 The only useful current is the fundamental component of current, as it is only this that can generate useful power.
The additional harmonic current not only flows within the power supply itself, but in all of the distribution cables, transformers and switch gear associated with the power supply and will thus cause additional loss.

There is an increasing awareness of the need to limit the level of harmonics that equipment can produce. Controls exist in many territories to provide mandatory limits on the level of harmonic current permitted for certain types of load.
Such regulatory controls are becoming more widespread with the use of internationally recognized standards such as IEC555, soon to be replaced with IEC1000-3.
Thus there is a need for an increased awareness amongst equipment designers as to whether their products generate harmonics and at what level.

It has been shown that the AC parameters described above can be important to both equipment manufactures and the suppliers of AC power. It is common however that the instrumentation being utilized for these applications is either inconvenient to use or incapable of providing the required functionality or accuracy, especially when the signals being analyzed are noisy or distorted.

Voltech Instruments specialize in the development and manufacture of power measurement instrumentation  designed to provide solutions for a wide range of applications from general purpose power measurement to the most complex and demanding power analysis tasks.