Transformers appear in almost every electrical and electronic product that the world produces providing the world with an enormous need for transformers.
Testing transformers and wound components is essential before final assembly into product.
This filters out failures ahead of time, avoids costly re working, reduces manufacturing costs and improves overall reliability.

Laminate transformers are mostly used as line frequency, low frequency and low/high voltage step-up, step-down transformers.Two coils are wound over a core such that they are magnetically coupled. The two coils are known as the primary and the secondary.
The core material tends to be constructed from thin sheets of a soft magnetic material (approx. 0.35 mm thick), usually made of 4% silicon steel, called laminations, these are insulated from each other by varnish. These thin sheets reduce eddy currents by increasing the resistance to the flow of such loss-causing currents.

Eddy currents are one of the two main elements associated with overall core losses. The second, Hysteresis Loss, is the energy used up by changing the magnetic state of the core during each cycle and eddy currents are currents induced in the core by time varying fluxes.

The core is partially assembled prior to the windings being inserted and once inserted the remaining laminate sheets are then interleaved to avoid all of the joints coming into one place, the joints are then staggered similar to laying bricks.

For the purpose of this document we will concentrate on a step-down laminate transformers. By designing the number of turns in the primary and secondary windings, any desired step-up or step-down transformer can be realized.

The coupling between the primary and secondary must be tight in a power transformer in order to reduce the leakage reactance, otherwise the drop in reactance will be considerable and will vary with secondary voltage and current.Therefore laminate transformers are wound with concentric windings (the primary and secondary are wound with half the turns onto the core limb, one over the other (to give a close coupling) with intervening insulation.

Voltech transformer testers combine virtually all tests into one box resulting in fast test time avoiding re configuration for each test.

Since for a given transformer, B, A and f are constant: - 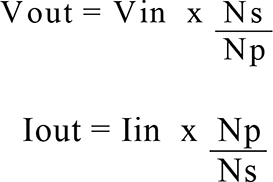 Because there is no electrical connection between the primary and secondary windings they provide isolation from one electrical circuit to another.
It is these unique properties of transformers that make them so widely used in all kinds of electrical / electronic equipment.

Core power losses comprise,
a) the hysteresis losses from magnetising and demagnetising the core through the BH loop,
b) plus any additional eddy current losses

In a solid core, current can circulate inside the core material generating I2R (resistive) losses.
Iron cores are usually laminated to restrict the current path and reduce this effect.
Ferrite cores have even higher resistance and hence very low eddy current losses. 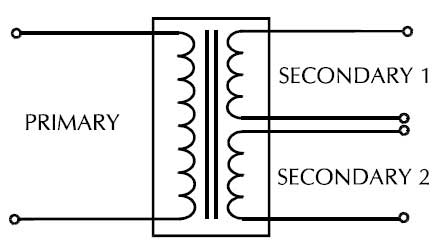 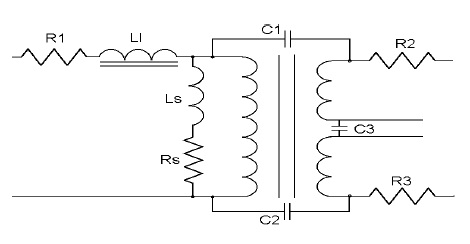 In the transformer equivalent circuit for the "real life" case
Ls and Rs are used to model the effect of core losses.
R1, R2, R3 are the resistances of the windings.
Ll is the leakage inductance.
C1, C2 and C3 are the inter-winding capacitances

The Voltech AT testers have the built-in capability described below.

To make use of this capability, the testers may be fitted with a number of different tests such as inductance, ac resistance, turns ratio, watts or ac hi-pot.
Tests are sold in packages such as Standard or Gold or may be purchased individually and fitted by the user via firmware upgrade.

External AC Power (AT5600 + AT3600) - Flexible power source for larger transformers.
The ATs programmable internal ac source may be used to provide up to 270V at 2 A RMS from 20 Hz to 1500 Hz.
This supply is used for measuring magnetizing current, watts and open-circuit voltages on iron laminate transformers.
The tests are usually made with the transformer off load or open circuit such that transformers rated at 2 kVA or more may be tested.
This internal ac source has several advantages, perhaps the most important being the ability to ramp up the voltage and current under real time software control to minimize inrush current and test time. 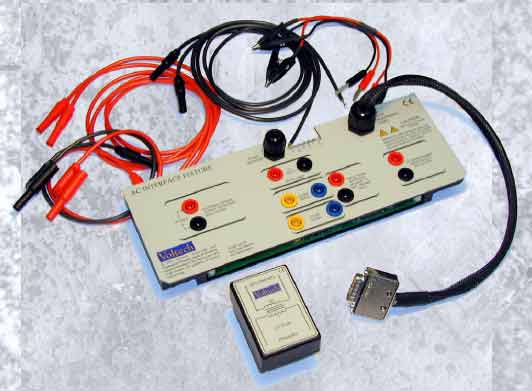 With the AC Interface, the AT capability may be extended up to 600V at 10A RMS

External AC Sources that may be integrated into the AT3600 test environment include:

Power transformers and chokes that carry a high dc current are common in power supplies and inverters. Testing these parts at their rated dc current provides complete confidence that the parts have been correctly wound, assembled and terminated.

The Voltech DC1000 25A dc current supply will seamlessly integrate into the AT3600 or ATi test environment to provide up to 250 A (10 x DC1000 in parallel) of smooth, programmable dc bias current with minimal effect on the ac inductance measurement.